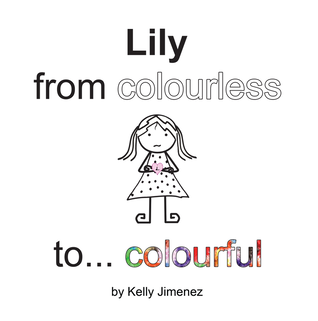 When nothing more seems fun, colourless Lily becomes. Then one day, a big piece of paper takes Lily to her creative world where she discovers freedom in creating art without worrying about the outcome. It's a joyful adventure that transforms her self- doubts and fears of making mistakes into fun, and her colours start to return.

As it was for Lily, this book is an invitation, to children, and adults alike, to venture into their creative world to play... to explore the infinite possibilities of creation and imagination and to discover the freedom, fun and benefits that lies in the process.

"One day I gave my 3 year old daughter a piece of paper and she said “I don’t know what to draw”. When I told her she could draw whatever she wanted, she said “No, I can’t do it.” She said she wanted me to draw for her instead and that she would tell me what to draw. I saw that as a big creativity emergency! How can a 3 year old not want to scribble and colour whatever she wanted? My husband and I immediately began reading Kelly’s book ‘Lily’ to her every day. After a month, the message had sunk in – that just like Lily, our daughter was free to draw, colour and scribble whatever she wanted. We would hear her say to herself “I can draw whatever I want and make it whatever colour I want” as she worked. She did (and still does)! I can’t recommend Kelly’s book ‘Lily’ enough. Its timeless message is a must read for both children and adults."
Vicky S., Vancouver, BC